Open up your own business with polygraph tests

In the following case study, we give you an insight into the polygraph market. Currently, the segment performing polygraph tests for customers and prospects is just at the beginning. In the market average, a lie detector test is estimated at $449-1.200 per session.

With the purchase of only one lie detector, you can amortize the costs by just one customer.

The entire market about finding the truth is recording significant growth rates! Be part of it at the very beginning to become self-employed with lie detector tests. With only a few sessions a month, you already achieve an average worker's wage in US/EU.

Service polygraph tests: How high is the demand?

We have analyzed in an in-house study the demand, the market and the marketing opportunities.
The demand and willingness to participate in a polygraph test is much higher than you think!

Is there already a polygraph test in use in your region?

Currently we are still at the beginning of the market penetration for lie detector tests as a service. A large number of our customers use the polygraph only for film, television or private purposes.

1. What is the target group and who needs a lie detector test? 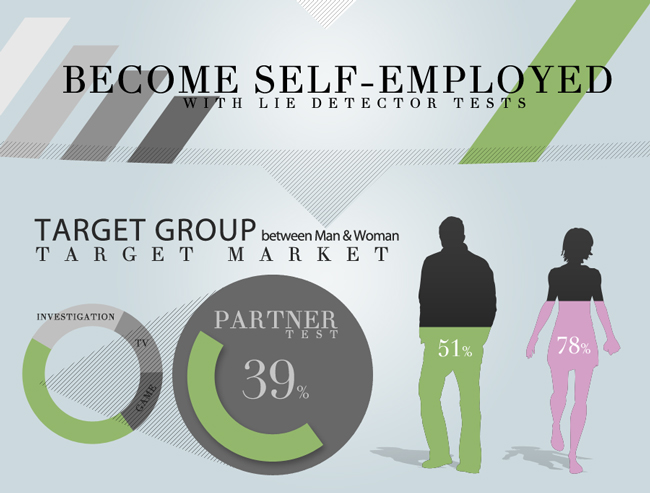 Who is interested in polygraph tests and for what purpose it is used?

A polygraphic investigation can establish the truth or enlightenment of infidelity, employee surveys, finding out unclean activities, and much more. When used correctly, it finds out when anyone, whether male or female, is lying. The interest and curiosity to lie detector tests in general lies in women at 78%. Also, 51% of men express a willingness to want to grapple with this issue.

The target market determination is even more important.. A polygraphic test can be performed for a variety of purposes, such as the "investigation" of certain acts or things in the foreground. So it is not surprising that the largest market segment is "Investigation of cheating" or the loyalty test. With a share of 39% male / female partner / in a relationship are interested in the truth in terms of cheating out in your partnership and solve this with a lie detector test. The second largest target market is for general education. TV Appearances and playful handling were close behind.

2. Growth market use of lie detectors and their distribution channels 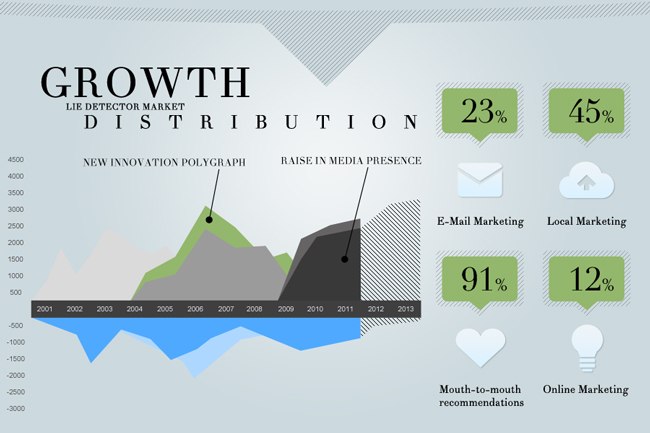 The use of polygraph tests is increasingly on the rise. A survey and application is not new and goes back on a long history in which a polygraph has been applied back a few decades to detect lies. With new innovations and the ever-increasing presence in the media focuses on the polygraphic evaluation lies, it goes further into the consciousness of people and promotes acceptance to use these, as well as to stand as test proband.

In this case, the service "lie detector test performing locally" are marketed in a variety of ways. As a classic sales channel we distinguish here four ways to bring to the man / woman. The percentage distribution refers to the success rate of a sales channel, called the conversion rate, compared to the other three marketing channels. In short:

- A successful use of e-mail marketing with very qualified addresses brings an average of 23% success rate.
- Targeted regional marketing reaches the clients directly in their home and provides a direct contact with the questioner and the proband in a local area. A connection which suggests with a 45% success rate to Beech.
- References and Customer Satisfaction and the accompanying Recommendation (word-of-mouth) build the distribution maximum of 91%.
- Due to the scattering loss, a Conversation rate of up to 12% can occur only at very well optimized online marketing.

3. Which target group is willing to participate in a polygraph test? 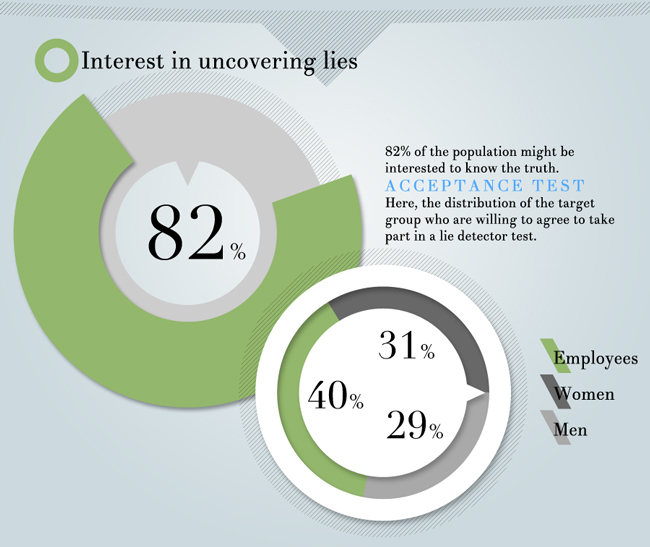 The truth coming to light is human nature. Human beings want to live in a world in which it is fair and equitable and others are not favored. In order to create a competitive advantage some criminal activity arises. Often these are never solved. The willingness to uncover these lies is at 82%.


4. Interest in polygraph tests by age 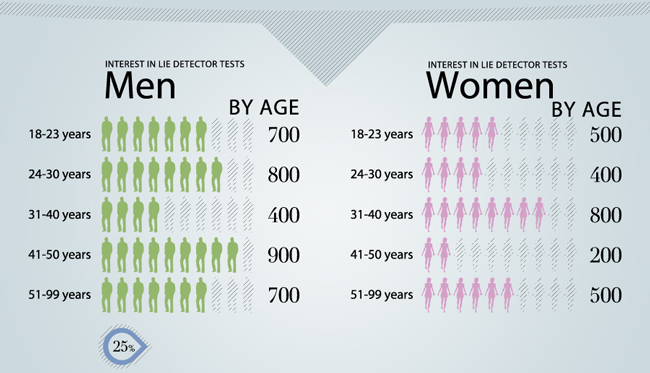 The distribution between men and women varies by age. For men aged 24-30 and 41-50 years of age are most susceptible to a lie detector test. For women, the readiness is the highest at the age of 31-40 years. Only about 25% of the population refuses to take part in a polygraph test.

The lie detector with real polygraph is characterized by its high compatibility, accuracy and ease of use. The polygraph software can be used with all Windows operating systems and is attached via USB connection with the measurement instruments. The lie detector is ready for use and easy to use after a few steps. Through the three measurement methods there are very precise results, which can be clearly and easily evaluated.

After a few test runs and refining your questionnaire you can be already incorporated to offer the service "lie detector tests" on your first clients. The software will help you step-by-step.

Be the first one in your region!

The online shop lie-detector.info sells high-quality polygraphs with six measurement methods. The product is characterized by its accuracy and compatibility with all Windows operating systems via USB port.